Remember all my whining and sobbing over my car air conditioning? I’ve delayed taking it in because of the $1200 compressor it was going to require. $59.95 later, some might say I suffered needlessly. Or my kids did, anyway. I suffered because I’m a nim-nim. They suffered because I forced them to. But it’s all over now. Thank you, God.

Today I went to Target with the three shortest of my children. With me were: Sister Shopping Cart Disaster, Loose Cannon, and Mr. Meltdown. Mr. Meltdown was great for two reasons: (1) He got to chow down on his favorite hot dogs, (2) I told him there was NO WAY we were buying anything for kids today. That eliminated the stress of choices. Sister Shopping Cart Disaster did not cause an actual disaster, but she about ran me over 24 times trying to push and steer. No. There is a reason 4 year olds don’t drive…anything. The Loose Cannon tried. She really did. But when it came time to throw away the open cup of marinara sauce, she just couldn’t quite get it into the trashcan. She dropped it. It exploded. And Target got a new color scheme. So did Sister Tinklebritches and myself. I have simply got to start shopping at 24 hour establishments at 3 a.m. I think it might be worth sacrificing the shut-eye.

I will leave you with a collection of Easter Bunnies from the Information Superhighway. You’ll like these.

Even the 50s had creepy Easter Bunnies… 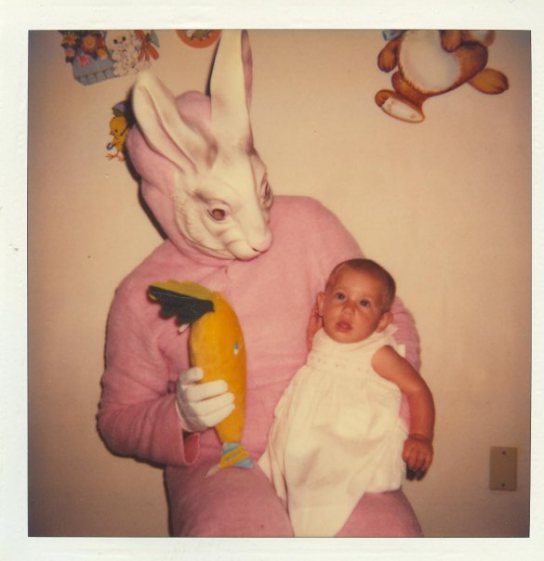 Something wicked this way comes…

Both of these characters are waiting on the Easter Bus…

Oh good, this one has a knife.

The parent of these children did not love them. Couldn’t have. 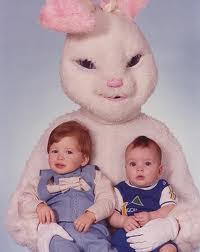 The illegitimate bunny child of the Easter Bunny and Chuck E. Cheese.

Paper mache at its absolute worst. 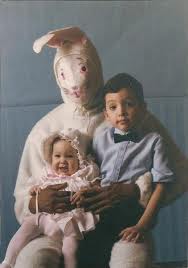