It is 12:02 a.m. on Christmas Eve and I’m still sitting in my church clothes from December 23. Been in these clothes now for 17 hours solid. They aren’t comfortable enough for that. I’m not sure what is blocking me from changing. Some sort of weird mental block.

I have many stories I could tell, but the only one interesting enough will take too much energy that I don’t have right now. It involves a pig and a media center and it’s entirely factual. I promise to tell that one before we hit 2013…assuming the Incas don’t come in with an end of the world thing between now and then.

For now, though, I will leave you with a photo and a quote. This photo was one of the “failures” from my Christmas card shoot. The kids had been annoying the fire out of me, preventing me from getting done what I wanted to. So I stood up, told them to go change, and announced that they were about to do a photo shoot. Aww, Mom! Yep. That’s right. You bug me, I bug you. What goes around comes around. You catch more flies with vinegar than honey. Or something.

So They were dressed and ready in nothing flat. But I wouldn’t call them the world’s most cooperative models. Right in the middle of a certain pose, SnuggleMonkey started to dance. Real dancing. Major dancing. And because such things seem to be contagious, my oldest joined in. And this is what we got. It’s not what I was going for, but it’s now my favorite. 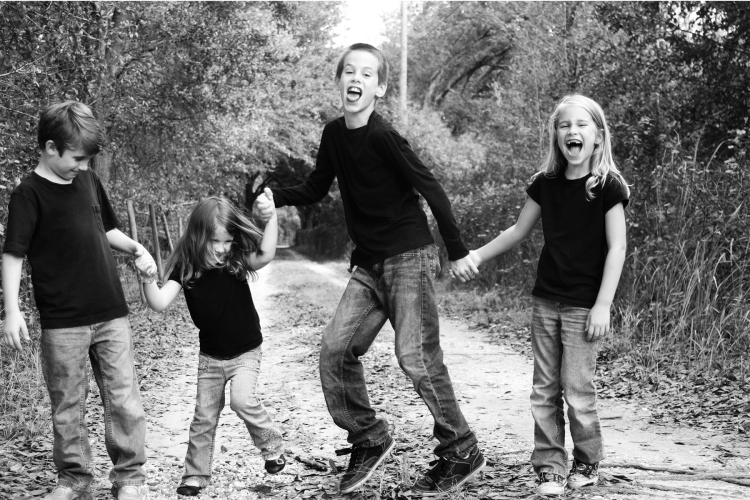 And as a final note, Mr. Normal in this photo…on the far left…waltzed into his Grammy’s guest room in our house where I was standing and proudly announced:

“Hey mama, I don’t have a Fairy Godmother. But I do have a Very Odd Mother.”

Merry Christmas. Hug your children. Draw near to your Father. Be intentional. Let it go. And do not miss a moment. Not one.

Today was a big day around here. It was Decoration Day at our house. Last night we purchased two live trees. You pre-lit people need to just stop reading and go find a blog for posers.
hahahahahahaha

I’m serious, though. Posers. All of you.

Only a shipped in Frasier Fir for this little lady.

At any rate, today I put lights up on the second story roof and found out that I’m afraid of heights. Who knew? I didn’t. I stink at putting up lights. No one got hurt. Lights are up. My tree is real. Two trees. Real. Both of them.

We had a lovely day together putting up decorations and I discovered that Beloved is the best tree decorator ever. She and the 4th child were peas in a little Christmas pod and just pretty much had the best day ever. I did, too. They stuck it out until the end.

To reward ourselves for our day of labor, we went to Mi Casa Mexican Restaurant near our current house. I’ve never been there, so this was especially fun for me. It was a fabulous place and there was lots of cilantro in the salsa. Mmm.

Two notable things occurred on the 10 minute drive to the restaurant. First, I discovered that my kids haven’t learned much spanish at all. We told them we were going to Mi Casa and they had no idea what that was. We offered a dollar to the first person to translate it. The answers began to pour in immediately. “MY CHEESE!” “Fourteen!” Etc. Etc. They were all quite wrong. We didn’t have to part with that dollar, needless to say.

Right after I learned how to say “my cheese” in Spanish, the driver of our car (the car featured in the previous post) “accidentally” hit the window-down button, thus releasing the driver’s side antler onto the highway.

Coincidence? I don’t think so. Fortunately, I know where to get another one…