Winking should not be done. Period. It’s awkward. The occasions that call for an appropriate wink are probably less than 50 per year, worldwide. Yeah. I’m standing behind those numbers.

If you have ever winked at someone or been winked at, I’m talking to you. Take a step back and think about it. Let’s think about when it works (besides never).

I went through a winky phase, which lasted way too long. If the phase had lasted an hour, it would have been too long, but I think it actually lasted about 2 weeks. There are people all over Florida that are probably still creeped out by what I was doing with my face. Sorry about that.

But then something new happened. People decided that since winking was so successful in person, they would invent a way to do it online. People turned to emojis. Some Japanese guy invented it. The world embraced it.

For a long, long time, I rejected this technology out of sheer stupidity. But the craze didn’t end. It got bigger, and fancier, and more colorful. Before it was over, there were smiling hershey kisses representing whatever you might suspect. And there were country flags and holidays and broken hearts and ghosts wearing eye patches. But there were also faces. Lots and lots of teeny, tiny faces. Where I had once rejected the practice out of principle, I was now forced to reject it due to my failing old person eyesight. Emojis are not for the ancient folk. Honestly, I have friends who are just a few years younger who send them to me and I have no idea what they are saying. I can’t see it. Not one bit. Can’t see the eyes, the mouth, anything.

If you want to offend me and get away with it, do it through Emojis. I won’t know. But if you try to say something nice through emojis, i still won’t know.

Sometimes I try to rise above the challenges and use them. That is the biggest mistake of all. What do they mean? What is the message behind them? This first guy…is he angry about a sinus problem? Allergy season? Why are his eyes closed? Are they swollen shut? 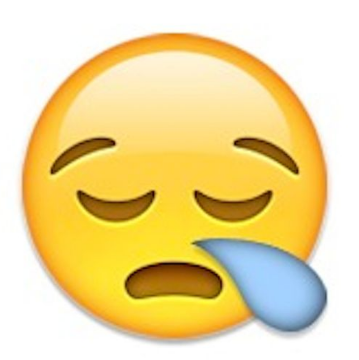 And this guy. What is the HUGE drop of water coming from where his nose should be? I have NO IDEA what this means. I can’t even venture a guess as to the mood he’s in. Confused? Sleepy? Afraid of books?

This guy. This guy appears on my phone with the same smile and many different types of eyes. What do closed eyes convey over open ones? Guy who has made a serious error but is still smiling and is afraid of impending pepper spray. It has to be that. Otherwise his eyes would be open.

While I was typing this post, my daughter sat down across from me at a table in a skating rink and asked me a question. I answered her question and then winked at her. I didn’t do it to prove a point or make a statement. I did it out of misguided instinct. Old habit.

She didn’t recognize my gesture as a wink. So I grabbed my phone and texted her this guy as if to say…?

6 thoughts on “The seedy underbelly of winking”