Thankfulness, sure. Yes. Gratitude. Let me just come back to that one when I’m not so distracted by the pies.

Pie. That’s the theme this Thanksgiving.

First, there was the uproar I caused by telling the world that I hate all pies. Many of you are now searching for my birth mother, because you are certain I could not be their daughter or his sister or your cousin. Others are asking around for a good nutritionist or some sort of Pie Therapy Center. I assure you that I have not suffered and the fact that I don’t eat pie hasn’t caused me any irreversible ills. Then, again, how do I know, right? Maybe I’d be Mary Poppins or Jo Frost if only I’d grown up eating pie. Or maybe I’d be the lady to someday be forklifted from a second story parlor because all she does is sit and eat…pie.

Whatever the case, I am not fond of it. It’s too squishy. And slimy. All pies are either squishy or slimy. I don’t need squishy and slimy in my life so much.

Early in the week, the pie topic became a heavy discussion point. The first pie was purchased by my own husband and was a pumpkin pie. After that, a pecan pie entered the building. Seriously? Please, just give this an honest look. 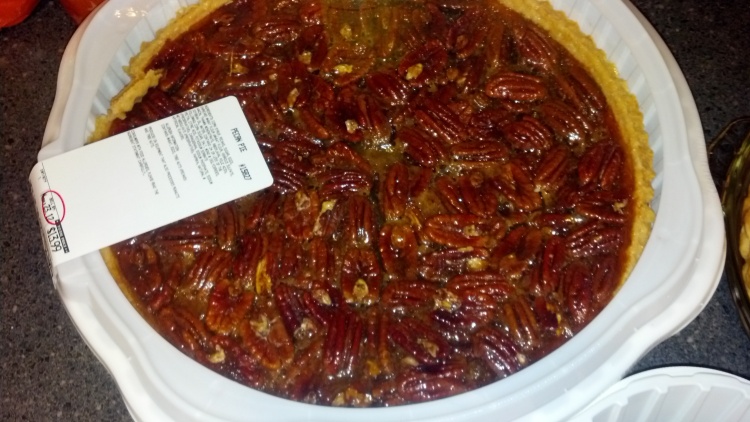 I mean it. Just wipe your slate clean for a moment and look at it like you are looking for the first time. That’s a bunch of brown, crusty bugs that someone baked into a pie. Or a genetic experiment. That is not edible. If you want to argue this point, may I suggest a free theme on WordPress. You can write your own blog called TheLifeofPie…or ThePiePiper…or…StickThisInYourPieandSmokeIt.

All of the above–Pumpkin Pie #1 and The Nasty Tree Bark Pie–are part of Pie Phase 1. Phase 2 involved two informed parties and four innocent bystanders. We were coming out of Wreck It Ralph yesterday, which my kids liked and most of the adults in the group did not, and heading toward the van. We thought we were going home. Within moments, there was a folded invitation of some sort that was whipped out in the front seat like a treasure map, some discussion about directions, and we were off! A wild pie chase ensued that captured the next 45 minutes. As it turned out, some real estate lady was giving away free pies and apparently pie lovers are incapable of turning away free pie even if that pie is located in another county. Wow. Who knew? I’m trying to think of something I love enough to pursue like that. Maybe a trunk load of Trefoils, compliments of the Girl Scouts I love so much. Mmm. Trefoils.

Pie Phase #3 was this little guy. 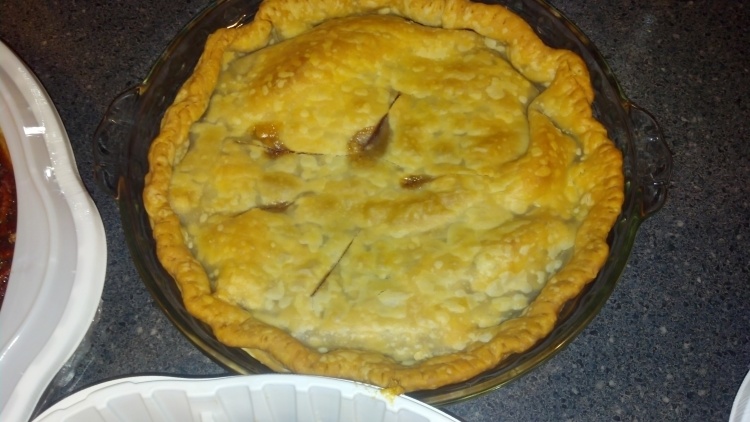 I know it’s not pretty. There’s no lattice work and, quite honestly, the outer part of the crust looks like a smashed-together series of tumors. But I made it and it’s MY cherry pie. I won’t be eating it, but my boy asked for it and I wasn’t going to deny him that.

So I guess I didn’t tell the WHOLE truth. I like my own pie. This one cherry pie recipe. No other cherry pies. Just this one. And I like it. Let’s move on.

Next door, there is a mince meat pie being made by Telley. Mince Meat pie? Could they have come up with a more disgusting name for something? That’s like Hairy Guts Cake or Squished Liver Custard. Why mince meat? Was this like Iceland? Someone named it Iceland so people wouldn’t know it was gorgeous and nobody would visit?

And Uncle Egg is bringing…2 pies.

Let’s do that math just real quick here. 4 pies already here at the house + 1 mince meat + 2 mystery pies = 7 pies. With 8 adults, one of whom doesn’t eat pie, all of the other adults can each have their own pie.

Now THAT is something to be thankful for.

5 thoughts on “There’s a recurring theme this Thanksgiving”