When I wrote my post this morning, the biggest thing on my mind was the baby donkey activity in Condo 302. As the day progressed, I discovered that the dude next door in Room 203 likes to lie around on his double bed next to the window with just a t-shirt and boxers. Dude. Close the blinds.

And when I went to dinner tonight, all I was thinking about was getting back to play Awkward Volleyball. It is every bit as bad as it sounds. It’s like we are intentionally trying to stink.

But after dinner, upon walking back into a very normal Room 202 (nothing to see here, folks), we turned on the TV briefly. That’s when we discovered that France had been attacked by another utterly evil madman. Second verse, same as the first.

It’s strange to me that it is still possible to experience shock, as often as we see this type of terrorism. But it is. I was shocked all over again. And maybe I felt more shocked tonight because I’ve had such a peaceful, joyful week. Tonight all I felt like doing was watching the news and crying.

I had to tear myself away from that agenda, though, because volleyball promises had been made and needed to be kept. So we played. It was mostly a game of “shout the person’s name with an indignant tone who just hit the ball into the sand spurs” and chase the ball. The goal was to come away with no sand spurs. Rarely were there 2 consecutive volleys. We made two friends on the beach and enjoyed them very much. They knew how to play the game and still hung out with us and tried to high five us on occasion. They talked about France and fear and hope.

At 9:30 I came in, still thinking. And as I sat here in front of my laptop, I thought about writing another letter to my kids. Another small word of encouragement to provide a candle’s flicker in a dark room. The TV was on. The headlines were scrolling across the screen. And my kids were unaffected. They weren’t reading the headlines or listening to Todd and I talk about it. And I realized then: they don’t need my letter. They aren’t looking for a candle. Because their world isn’t dark. Their world is still intact. Full of light and security. Their mom and dad and siblings and cousins were all in the same room. They’d just played themselves silly at a sport they didn’t understand at all. They had beds to sleep in, bibles on the kitchen table, and electronics in their laps (yeah, I know. Better to have the bibles in their laps and the electronics on the kitchen table. Give us time…). They do not yet feel the fear. Because we are their safety and their light.

So this post isn’t for them. This post is for me. For you. For friends. For parents trying to raise God-fearing, life-respecting children. For anyone feeling the fear. For anyone trying to push back against the darkness.

This is for us.

We live in a world of lost souls, some malicious and some just wandering blindly. We live in a world of mass media and instantaneous information. We live in a world of terrorism and evil. I don’t know that it’s necessarily worse now, but it’s definitely more frequent. And the moment it happens, it is everywhere. On every channel, timeline, blog, account, and conversation. We talk about gun control. If only we controlled guns better, we could fix this. Well, I’m not a gun owner or a gun hater. I don’t own one because I don’t see the point and I’d certainly shoot my own leg off within 24 hours of getting the permit. But tonight’s attack in France settled the matter in my mind. You take away their guns and they’ll get into a semi and drive into a crowd. Crazy is what kills. Evil is what kills. Take away one weapon, they’ll find another. Fight me on that if you want to, but I won’t fight you back. I’ll just ask you to meet me on the beach volleyball court and we’ll settle it like athletes.

No, it is the heart of a man that kills another man. And maybe there’s a point to carrying a weapon to protect a crowd against a madman, but that is not my role and never will be. I cannot wield a weapon of any kind.

I’m tempted to live in fear. Avoid public celebrations. Cower. But that’s no good either. It’s like trying to constantly sanitize my hands only to find out I was the first one to get the flu. I can’t control that.

Ephesians 6:10-18
10 Finally, be strong in the Lord and in the strength of his might. 11 Put on the whole armor of God, that you may be able to stand against the schemes of the devil. 12 For we do not wrestle against flesh and blood, but against the rulers, against the authorities, against the cosmic powers over this present darkness, against the spiritual forces of evil in the heavenly places. 13 Therefore take up the whole armor of God, that you may be able to withstand in the evil day, and having done all, to stand firm. 14 Stand therefore, having fastened on the belt of truth, and having put on the breastplate of righteousness, 15 and, as shoes for your feet, having put on the readiness given by the gospel of peace. 16 In all circumstances take up the shield of faith, with which you can extinguish all the flaming darts of the evil one; 17 and take the helmet of salvation, and the sword of the Spirit, which is the word of God, 18 praying at all times in the Spirit, with all prayer and supplication.

I do have a weapon at my disposal. It is my Bible. But it can’t stay on the kitchen table. I have to know it, be filled with it, and carry it as my sword. My faith is my defense when a semi drives toward me or a man aims a gun at me.

Ecclesiastes 12
12 Remember also your Creator in the days of your youth, before the evil days come and the years draw near of which you will say, “I have no pleasure in them”; 2 before the sun and the light and the moon and the stars are darkened and the clouds return after the rain, 3 in the day when the keepers of the house tremble, and the strong men are bent, and the grinders cease because they are few, and those who look through the windows are dimmed, 4 and the doors on the street are shut—when the sound of the grinding is low, and one rises up at the sound of a bird, and all the daughters of song are brought low— 5 they are afraid also of what is high, and terrors are in the way; the almond tree blossoms, the grasshopper drags itself along,[a] and desire fails, because man is going to his eternal home, and the mourners go about the streets— 13 The end of the matter; all has been heard. Fear God and keep his commandments, for this is the whole duty of man.[c] 14 For God will bring every deed into judgment, with[d] every secret thing, whether good or evil.

God will judge. I will not fear.

Tomorrow I will try harder — I must try harder — to fill up with what is important. To spill out to others what fills me. To be a light so that those lost souls wandering might look to Jesus. The malicious ones will never look. But the wandering ones might.

I can’t control the evil, and I can’t make it go away, but if it looks me in the face, I can look up. 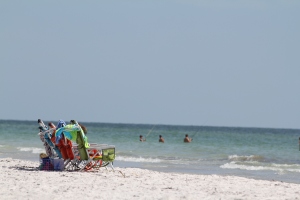 3 thoughts on “When evil looks you in the eye”